Tomorrow will be my first day back at the office since March 2020.  I’m not at all happy about it, with all this “pingdemic” stuff going on.  I’m also bothered about the effect that being trapped in an office again is going to have on my mental health.  And, oh, the practical nightmares.  I ordered my holiday photos from Snapfish – was I supposed to order them to come here or to go to the office/

Bleurgh.  And it saps your energy.

Some trains between Manchester, London and Birmingham have been cancelled, because of the bloody pingdemic.   And I was disappointed to see so many people walking round Tesco without masks, when it was made quite clear that Tesco were asking you to wear masks.  But the good news is that new cases are down for a sixth day in a row.

Today was the dreaded first day back in the office.  Apart from the fact that I forgot to take my afternoon snack (tangerines) so I was starving by the end of the day, it wasn’t as bad as I was expecting – although that was mainly because not many people were in, so I was on my own and hardly spoke to anyone else all day, which suited me fine!   Missing my walks isn’t going to do me any good, though.  I haven’t dared face the scales since getting back from the Lakes, but I’m sure everything feels tight.  Public Health England keep mithering about fat we all are!

There do not seem to be any Covid protocols at the office.  There are a few bottles of hand sanitiser around, but that’s about it.

I posted on Facebook that I was nervy about going back, and people were really kind and supportive.  I appreciate that.

Medals galore in Tokyo, including gold for Tom Dean in the 200m freestyle and silver for Manchester’s Georgia Taylor-Brown in the triathlon.   Good good!  So annoying that I can’t seem to watch the tennis anywhere, though.

The holiday company rang in response to my e-mail, sent yesterday, saying how upset I was that they’d cancelled at such short notice, but seemed more concerned about trying to persuade me to book another trip than anything else.  It’s not their fault: it’s their American head office’s fault.  But none of that helps me.

131 deaths today – although Tuesday’s figures do tend to be high.  But cases are down for a 7th day in a row … hopefully we’ll soon see death numbers falling too.

And it is absolutely throwing it down 😦 .

Hooray!!   My cousin’s pre-wedding party has been rescheduled.  It no longer clashes with the match!

Cases are up today, bah.  But still way down on last week.  And fully-vaccinated arrivals from the US and all EU countries will no longer need to quarantine. although tests will still be needed.  There’d been some rumours about Canada, but Canada hasn’t been mentioned.

More medals at the Olympics!  Including gold for the 200m freestyle relay men’s swimming team – including James Guy, originally from Bury.  (But still no tennis coverage.)

Still no tennis coverage (ETA – hooray!!!  I have now discovered that you can watch it on Eurosport Player!!!)

And cases are up again … although nowhere near where they were a week ago.   But, locally, rates are still dropping – long may it last!   However, there’ve been a “small number of positive tests” in United’s “first team training squad”, causing the cancellation of the friendly against Preston, which is a bit worrying.

Israel’s to start giving booster shots of the vaccine, the first country to do so.

And, hooray, the self-isolation nightmare will definitely end on August 16th!

More medals, including gold for Bethany Shriever in the BMX!

The North West now has the lowest R rate in the country, which is excellent news, and cases nationwide are down a bit today.

Things are bad elsewhere, though – parts of Asia are struggling.  And poor Sydney’s staying in lockdown for another month, even though there are so few cases there.

I went raspberry picking at Kenyon Hall this morning.

Then, after doing some house stuff, I went into town – The Vienna Coffee House has finally reopened after being refurbished, so I wanted to go there.  Town was really busy – mainly people eating outdoors.  It seems like people are going into town more to eat than to shop these days – which, to be fair, was exactly what I was doing!  And outdoor dining is here to stay … well, until it gets colder and wetter, presumably!

More medals for Team GB, including golds in the two new mixed events – the swimming relay and the triathlon!  And Pablo Carreno Busta beat Nole to win bronze for Spain in the men’s tennis, which is lovely.  Belinda Bencic won gold in the ladies’ tennis.  The men’s final tomorrow seems to be on at a really stupid time – typical – but at least it’s not overnight.

Case numbers are going down again, thankfully.   Deaths aren’t, yet, but aren’t rising either.

How on earth did it get to be August?!

It is SO nice not having to pre-book things for the National Trust and English Heritage any more – although I’m rather annoyed that the house at Dunham Massey is only open at weekends.  Desperately hoping that CADW abolish their booking system when restrictions in Wales are removed at the end of this week.  I went to Dunham Massey today, but I watched the tennis final – Sascha Zverev thrashed Karen Khachanov – first, and obviously I had no idea how long it was going to last, so I couldn’t have pre-booked. 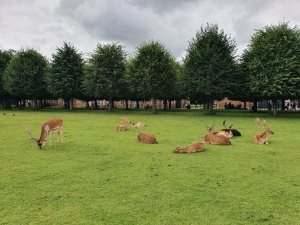 Case numbers in the borough of Bury are now, like those in Bolton, below the average for England, and the average across Greater Manchester as a whole isn’t that much above the national average, and falling.  However, there are concerns – not particularly here, just everywhere – that a lot of younger people haven’t been vaccinated, and there’s some bizarre talk of trying to bribe them with free pizza and kebabs.  I am not making this up.  This is coming from pizza and kebab firms looking for publicity, not from the authorities!   Around 72.5% of adults in the UK are now fully vaccinated, though.

And more medals for Team GB, including golds for Manchester’s own Charlotte Worthington in the BMX event, and for Max Whitlock in the pommel horse gymnastics.