Went into town for an optician’s appointment today.  Very strange seeing everywhere so quiet, when the Christmas markets should be open.  I love the Christmas markets.  And that miserable git Matt Hancock’s said that it’s too soon to say whether or not the lockdown will end on December 2nd.  Retailers are getting really fed up: Waterstones (books) and Clinton (cards) have both complained about their shops having to close, when books and cards can be readily bought in supermarkets, garden centres and newsagents.

On a happier note, another firm, Moderna, have also got a vaccine which is over 90% effective.  And hopes are rising that testing will be made available to people with loved ones in care homes, allowing for visits.

Meanwhile, Boris is self-isolating, just at a crucial stage of the Brexit negotiations and in the middle of Lockdown II, after an MP with whom he attended a meeting tested positive.  Several other MPs are also affected.

And there’s been a worrying surge in cases in Hull and Grimsby.

Superb match between Rafa and Dominic …  which, sadly, Rafa lost 😦 .

A load of virus cases in England have been “relocated”, because the addresses on the system were wrong.  Is this a joke?  Needless to say, they have mainly been relocated to urban parts of the north.  The area with the largest number of cases relocated away from it is the area which includes Rishi Sunak’s constituency.

Easyjet’s suffered the first loss in its history.

And Glasgow and various other parts of Scotland are being put into Tier 4 … which is basically the sort of lockdown that the whole of England’s presently in.  This is awful.  I know this is a horrible situation, but people and businesses can’t take much more.

I went to Tesco this morning, coming home at about 10 to 9.  The amount of traffic, considering that we’re meant to be in lockdown, was insane.  OK, the stupid council’s decision to reduce the main road to one lane each way makes it a lot worse, but even so.  Could have been parents returning from taking kids to school, but I’m not convinced.  Loads of people are working at offices, when they could be working from home.

And the police have been told to stop issuing the highest level of fines for breaking regulations.  TBH, I agree that the fixed penalty system’s stupid – £10,000 is a year’s net income to some people but loose change to others.  But why wasn’t this taken into consideration in the first place?

I went to the office to drop some stuff off this morning.  Just after I arrived, the fire alarm went off.  I was tempted just to go home and leave the stuff I’d dropped off lying about on the desk where I’d dumped it, but decided that that wouldn’t be very fair, so I waited outside until it was sorted and I could go back in and put everything away properly.  Hordes of people came streaming out of the other offices in the block – and these are people whose jobs could certainly be done from home.  There were even people from a social group which uses one of the offices for meet-ups, and I’m pretty sure that social groups aren’t allowed to meet up during lockdown –  unless it’s some sort of emotional support group, which this isn’t.  FFS!

There’s talk of making restrictions in Tiers 2 and 3 even tighter when lockdown ends.  I have just had enough of this.  We’ve been under restrictions since July.  Rates in the North West are falling.  What are they going to try to do to us now?

In Scotland, police are to have powers to stop people travelling outside their own council areas in Tier 3 and Tier 4 areas.  Like they’re living in an open prison.  I understand that this is a really, really shit situation, but people have just had enough.

There’s been a big anti-lockdown protest in Berlin.

There is some talk of a Christmas truce here.   As long as you only hold small family gatherings, and only travel by car – which is a pretty stupid suggestion, given that a lot of people don’t have cars.  But maybe it means that my sister and brother-in-law and nephews will be able to come here for Christmas after all.

But there are concerns that the Australian Open may not be able to go ahead.  Players have said that they’re willing to self-isolate for a fortnight – which, given that that’d include Christmas and New Year if they were to be out of quarantine before the start of the warm-up events, is no small commitment.   But now the government of Victoria’s suggesting it won’t let players arrive until January.

And Boris has appeared at PM’s Questions by video link, as he is currently confined to barracks.

The new oven has arrived, hooray!

Rafa has reached the semi-finals, hooray!

Government funding’s been announced for some sports clubs, due to the effects of the virus.

Mink in Sweden have now got the virus as well.  What is it with mink?!

More bad news in the retail industry today – more firms going into administration.  And we’re only hearing about big firms – how many small shops have gone?

Infection rates in the North West continue to fall, which is obviously very good news, but infection rates elsewhere in England continue to rise.  It’s weird: it’s like we’re having a different pandemic to the rest of the country.   The infection rate across the 10 boroughs is down to 399.10, down 22% week-on-week.   The average across England is 265.5 and rising.  Over 500 deaths across the UK again today.  Italy suffered nearly 800 yesterday.  And New York’s closed schools again.

Hull is much the worst affected place in the country now, with Scarborough, Teesside, Bristol, Swale (in Kent), Stoke, and parts of Leics, Lincs and West Yorks also struggling.

Please, please, please let us out of bloody lockdown on December 2nd.  Northern Ireland’s going back into lockdown after next week.  So they’re coming out for one week.  Well, I hope everyone manages to get a hair appointment.  How bloody demoralising – practically straight back into it.

And Brexit talks have been suspended after one of the EU negotiators tested positive for the virus.  It wouldn’t surprise me in the slightest if Michel Barnier had made the whole thing up to throw a spanner in the works, but I suppose we have to assume it’s genuine.

It has rained nearly all day.  Despite this, there were still long queues at both the cafes in the park.

Not convinced about all this focus on Christmas.  Much as I want to see my sister and brother-in-law and the kids, we’re being told that 5 days of lockdown will be “needed” for every day for which restrictions are eased.  If we have 5 days over Christmas (the 27th and 28th are Bank Holidays, as Christmas Day and Boxing Day fall at the weekend), plus New Year’s Eve and New Year’s Day, that means a 35 day lockdown.  People’s mental health is suffering as it is, and a lot of businesses won’t make it through another 35 days of being closed.  We’re not in some sort of Hollywood film where everything revolves around Christmas.  I just don’t think it can be justified.  Which is extremely sad.

2 million people in Scotland are now back in lockdown, and businesses in Northern Ireland are furious that they’ll have to close again after only being able to reopen for a week.

The Serbian Orthodox Patriarch’s died with coronavirus, after attending a funeral for the Serbian Orthodox church’s chief cleric in Montenegro … lots of people, no social distancing, people even kissing the body.  It’s very sad, but there does seem to be an issue with people thinking that religious services should be exempt from the rules.  It’s happening here too.  I don’t understand why religious people seem to think they should be exempt.

Matt Hancock’s wittering on about how “we must keep our resolve”.  It might come across quite well if it was Churchill saying it.  Still, at least he manages to brush his hair before leading a press conference.

Oh no!!  Rafa lost to Daniil in the semis … after serving for the match in the 2nd set.  Just can’t win the World Tour Finals 😦 .   And it looks as if the Australian Open might be put back to March.  Tennis Australia’s idea was for the players and anyone accompanying them to arrive in mid-December, go into quarantine for 2 weeks, and then be ready for the warm-up events and for the Open to start on January 18th as scheduled, but it looks as if the government of Victoria’s going to put the kibosh on it.  That is a blow 😦 .  January’s a miserable time of year even in normal times, and the Aussie Open’s the one good thing about it.   And then that’ll muck up the calendar for the rest of the year

It’s five weeks to Christmas!   Doesn’t feel like it, with no Christmas markets … although some people are trying to cheer themselves up by putting their trees and decorations up.  Please tell me that the people over the road are going to switch their garish flashing lights off during the day – I love Christmas, but those lights flashing 24/7 will do my head in!

And it’s 5 days until Thanksgiving … and cases seem to be soaring in most parts of the US 😦 .

Managed to walk round Hollingworth Lake and have a mince pie 🙂 from The Olive and Pickle before the rain started.

I meant to go out for another walk later, but I had to make a start on clearing out the kitchen cupboards, and then Dominic and Nole’s match lasted nearly three hours and it was dark by the time it’d finished.

We’re going to be told tomorrow what we are and aren’t allowed to do over Christmas.  It’d be vaguely comical if it wasn’t such a nightmare – it sounds as if we’re all being summoned into the school hall to be given a lecture about how reports will be handed out after the carol service and the Chanukah play, and you must give yours to your parents Or Else.

Then, on Thursday, we’re going to be told which tier we’re going in after lockdown.  This again sounds like being at school.  Some areas are being moved into higher tiers.  It doesn’t sound like we’ll be going into a lower tier.  The average infection rate across Greater Manchester’s below 360, which is well below where it was, but the national average is around 260.  Hull, by contrast, is up at around 700, with Swale in Kent around 650 and several other places over 500.  Worse news is the talk of tighter restrictions in each tier.  FFS, are things not bad enough?  But the 10pm curfew’s being lifted, which isn’t an awful lot of help when pubs and restaurants are closed anyway.

Finished clearing out the kitchen drawers and cupboards, but ran out of time, energy and enthusiasm so still haven’t done the fridge and the freezer.  I’ll try to get them done tomorrow.  Then that’s inside done.  My car urgently needs valeting, but all the decent places are closed due to lockdown.

Went to Tatton Park this morning – and there was a rainbow right over Tatton Hall!   You have to book to go round the gardens, which I’d done, but not for the estate, which was pretty busy.  It’s a big enough place to be able to walk around without going near anyone else, but the queue for takeaway food and drinks was horrendous!  It wasn’t too bad when I went, at about 11, but by half 12 it really was long!  Nice sunny morning, after all the rain yesterday.  Once we’re back in the evil tier system, I shouldn’t officially be going outside Greater Manchester into East Cheshire, but … well, we’ll see. 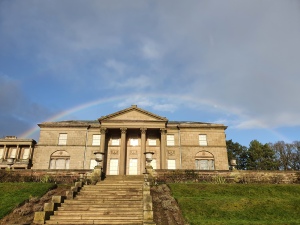