We are being moved back to “level 4”.  A briefing was held today explaining that, if cases keep increasing at this rate, we could be seeing 200 deaths a day by mid-November.  Spain, sadly, is already seeing around 250 deaths a day.

A COBRA meeting’s to be held tomorrow, and Boris will then announce what’s going to happen next.  I hope they do bring in this 10pm curfew – I’m sorry for people who own pubs and bars, but something’s got to give.  But what else?  We’ve also been told that this could go on for at least another 6 months.   OK, I think we all knew that anyway, but it’s not very nice actually hearing it 😦 .

Some Labour politicians continue to say that the whole thing’s the Government’s fault.  Other political points-scorers say that it’s all Dominic Cummings’ fault.  This is crap.  And unhelpful.

Several friends have had kids sent home from school.  In some cases, this was because another kid in their bubble has got the virus.  In others, it was just because a kid coughed or was running a slight temperature – in which case, schools are insisting that they’re tested, but there aren’t enough testing slots available.  There were loads of school-age kids in the park.  They shouldn’t really be out if they’re meant to be self-isolating … but it’s a big park and you can keep well away from anyone else.  Except that some of them were in the playground.

Four more areas of Wales have been locked down, and people in Northern Ireland may no longer mix indoors with anyone outside their household/bubble.

Everyone is getting a bit stressed and ratty.  And Nole’s just won the Italian Open.

Scotland’s also banned all visiting between households, and the First Minister of Wales has urged people not to travel … which is not great, as I was planning to have a few days in Wales in November.  How I wish I’d used my holiday days in July, but how was I to know that this was going to happen?

I sincerely hope that this works, especially as I want my trip to Bath in mid-October.  However, as one MP for a northern constituency pointed out, the measures introduced so far haven’t worked.  Bolton is back over 200.  We’re now over 150, with the city centre and several other boroughs not far behind, and Rossendale and Hyndburn even worse.  Wigan is now over 100.  Liverpool is over 150.  South Tyneside 130.  And most people really are trying to keep the rules.  I don’t know what’s going wrong.

These restrictions are likely to be in place for six months.  Six bloody months.  It’s just a nightmare.

Scientists say that the measures don’t go far enough.  Sports clubs, pubs, etc, are in despair.  It’s just a no win situation.  Cases have risen by 25% since yesterday, but … oh, who the hell knows?

One of my colleagues thinks she might have the virus.  Hopefully it’s just a bad cold or something, but we’ll have to see.

It has rained nearly all day.

And Donald Trump is blaming China.  Which doesn’t help anyone.

Rishi Sunak has announced that there won’t be a proper Budget, but that a series of new schemes are being announced for when the current furlough scheme ends on October 31st.   More grants for self-employed people, although the amounts aren’t large.  For employed people, if someone’s working at least 1/3 of their usual hours, but not full time, the Government will pay their wages for 1/3 of the missed time, and employers have to pay the other 1/3.  He’s had extensive discussions with the CBI and the TUC, and I think we all have to accept that the state cannot pay 80% of people’s wages indefinitely.  However, people who are still off because their employers think that claiming the furlough money’s more profitable than bringing staff back (and I don’t mean that in a bad way, because I quite understand that places like sandwich shops in city centres just are not getting people through the doors, through no fault of their own), and people in sectors which can’t get going, such as event planning and live music, are out.  And, with the best will in the world, many small private sector businesses are not going to be able to pay people 55% of their wages for 33% of the work.

Infection rates continue to rise, here and in most parts of Europe.  Denmark, Iceland, and Slovakia are off the travel corridor list.  So is Curacao.  There are reports from Israel of hospitals having to turn away patients.

And the French Open draw is horrible.

I had my first “autumn latte” of the year today.  I usually only drink tea, but I do quite like the spiced/gingerbread lattes which we get in autumn and in the run-up to Christmas.  This would normally be at Costa Coffee, whilst in town to go to the theatre or the pictures, but, this year, it was at the café at the park.  Just another little sign of the times!

Leeds, Wigan, Stockport and Blackpool have been put into “local lockdown”.   A load of areas in Wales have been put into strict lockdown, and support bubbles there have been banned, which I think it very harsh.  And there’ve been several outbreaks at university halls of residence.

People everywhere are getting fed up.  There’ve been big demos in Marseille against the closure of restaurants there.  An “I’m out” hashtag is being widely shared on social media in the Netherlands.  It’s very hard to try to find a balance, and I’m very sorry for the authorities.

On a happier note, Princess Eugenie and Jack Brooksbank are expecting a baby.

I’ve had a really nice day out at Hardwick Hall.  The house has finally reopened at weekends, hooray!  It’s my favourite National Trust house, and I was rather upset when it initially reopened on weekdays only.  However, as at Bodnant Garden, the signposting was awful.  I understand that some areas are closed off, but the alternative routes just aren’t signposted properly.  Oh well. 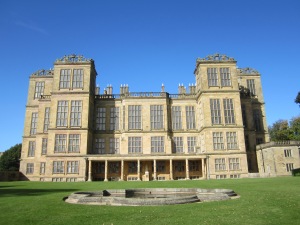 Cases continue to rise.  Household to household transmission.  It’s so hard to monitor, short of having the police or the Army marching round suburban streets, which is hardly an option.

Universities going back has turned into a nightmare.  There are outbreaks at 32 universities, one of the worst being at Manchester Met, where over 120 students have tested positive and over 1,500 more are now confined to barracks.  And here we go again with the political points-scorers, who claim that this has all happened because David Cameron and Nick Clegg privatised student accommodation.  This is crap.  Halls had to open because students need access to labs, libraries, etc, which they can’t get over Zoom.  But, from my experience of my first year in halls, shared bathrooms, shared kitchen, communal dining room, shared TV room (although I doubt they have those any more), narrow corridors, etc, social distancing in a hall of residence is well nigh impossible.  And there’ve been numerous reports of parties.  This is now a complete mess.  You can’t even say that all students should go home, because they may then carry the virus to their families and local communities.

Meanwhile, Sadiq Khan, never one to miss an opportunity to stir up trouble, is claiming that London is missing out because the authorities have actually dared to pay some attention to testing north of Watford.

And Oxford United sprayed their coach (as in vehicle, not as in manager) with alcohol-based sanitiser, in an effort to up precautions.  Unfortunately, a detector on the coach picked up the alcohol and thought the driver was drunk.  So the coach wouldn’t start.  So the players had to drive all the way to Accrington in their own cars … where, rather embarrassingly for Accrington Stanley, they won 4-1.  We just about managed to win at Brighton, 3-2.

Things are not looking good for the French Open.  Crap weather and slower-than-usual balls.  Bleurgh.

No-one can see an end to the virus nightmare.  My cousin is due to get married next August, and is now worried that wedding parties still won’t be allowed then.

The weather is gorgeous here.  I went to Dunham Massey this morning.  It was lovely.

Sadly, it is not gorgeous in Paris.  It is cold, grey and damp, which won’t suit Rafa at all.  And the new balls are horrible.  Dan Evans, after losing to Kei, said that he wouldn’t give them to a dog.  And Andy was thrashed by Stan.  It’s not going well 😦 .

I am so sorry for the students caught up in this virus nightmare.  These are 18-year-olds, away from home for the first time, and they’re practically being held under lock and key at the halls at Manchester Met.  There are police and security staff outside.  Meanwhile, there’ve been complaints that the 10pm curfew means that everyone is piling out of pubs and bars at the same time.  There are reports of splits in the government. Wales is going to close down completely if any more areas are put in local lockdown.  And does anyone know what “exponentially” actually means?