Some quite hopeful news today – the tests on the vaccine being developed in Oxford have shown very encouraging results.  It’s early days, but fingers crossed.

However, even Beefeaters are being made redundant now.  More job losses are coming every day :-(.

The overall situation’s improving, but things in Blackburn are getting worse, which is worrying.  France and Spain are also seeing some worrying local clusters.

Dry day today, and it was nice in the park.

I went into the office today, and handled things badly by blanking the bosses.  I was hoping to get in and out whilst they weren’t there, but they both turned up before I’d sorted all my stuff out!   I know I handled it badly, but I’m just so fed up about the way we’ve been treated.

We have now been working from home for 18 weeks.  In that time, we have not once had so much as a three word e-mail saying “Is everyone OK?”.  Other firms have been checking on people regularly, and organising on-line activities so that people feel supported.  OK, it’s less of an issue now that lockdown’s over and people can see their families and friends again, but the fact that they never even asked if we were OK during the full lockdown was appalling.  It’s been eating away at me, so I decided that I would say, politely, that I realised that it was a difficult time but that it was disappointing, and then try to move on.

I was not expecting a grovelling apology, and for a big bouquet of flowers to be delivered to every team member.  I was kind of hoping for something along the lines of OK, point taken.  Instead, the response I got was that that they had not once, in 18 weeks, bothered to ask how anyone was because it would be “intrusive”.  These are the people who rang someone whilst she was in hospital, to hassle her about an unimportant work issue.  What a pathetic … it’s not even an excuse so much as a lie.  I’m even more annoyed now!

The Washington tennis event’s been cancelled.  I can’t honestly see the US Open going ahead.  Things in New York aren’t too bad, but, with the overall situation in America, quarantine requirements for players returning home afterwards are just going to be make it impossible.

I am off to the frozen yoghurt shop!

Today, we got an e-mail from work saying that unused holidays couldn’t be carried forward until next year because it wasn’t their problem that everyone’s plans had been cancelled.

The Government has tried to protect people from this by saying that holidays can be carried forward if people can’t take them, but, unfortunately, there’s a loophole allowing employers to get out of this if people are working from home rather than being furloughed.

So people who’ve been furloughed have been getting 80% of their pay for doing nothing for 4 months, and can carry their holidays forward, whereas people who’ve been working from home have been working full time through it all, and, unless their employers treat them decent, can’t carry days forward for holidays which were cancelled.  It’s hard not to feel bitter about this.  I don’t for one second mean to have a go at people who cannot work because their workplaces are closed and they can’t work from home, but it’s difficult not to feel hard done by.

Meanwhile, there are clusters in some very unlikely places, such as Carlisle.

Last home match of the season tonight.  In July, and without being able to go in person!  Strange times.

We had an e-mail from work today, saying, no, not that they’d like to thank us for our efforts throughout this difficult time and that they hope we and our loved ones are OK, but that, whilst they “appreciate your desire to be in the office” (I did wonder if this was meant sarcastically, but I think they’re just delusional), it appears that safety requirements won’t be met if more than so many people are there at once.  So we have each been allocated two days a week on which we may work at the office.  May, not must.  I’ve said that I’ll stay at home for now.  Hooray!!  The wording was so rude and patronising, about how they’re happy with the fact that we are actually doing some work whilst we’re at home, like we’re a bunch of naughty schoolkids who might just have been throwing paper aeroplanes around as soon as the teacher’s back was turned.  And still not even “Hope you are all keeping well”.

My sister and brother-in-law and the kids are at an apartment in Spain.  It is hot and sunny.  I am very jealous.  I suppose there’s nothing to stop me from going to Spain, but sitting by the pool is a bit crap on your own!

We only managed to draw with West Ham last night, so still need at least a point on Sunday.  So stressful!

From today, it is compulsory in England to wear masks in shops, shopping centres and takeaway food places.  I’ve been to:

Today has been a nightmare.  At 10 o’clock this morning, the doorbell rang.  I thought it was the postman.  No – it was a man saying that he’d come to cut down a tree in next door’s garden, and please would I move my car.  How bloody rude of next door not even to mention it.  What would they have done if I’d been out but the car had been in?  It’s now nearly 5 o’clock and the tree brigade (there are 5 of them) are still here.  And, when I got back from my walk in the park, they’d not only dumped a load of soil and twigs all over my path but had dug up one of the flags!   I didn’t want a row but I was fuming.  Anyway, they’ve now finally got the tree root out and are clearing up, but it’s all been pretty stressful.

Oh no!!  I haven’t seen my sister and brother-in-law and the kids since February.  I was meant to be seeing them as soon as they got back from Spain.  But, because of the upsurge of cases in Catalunya (which is 650 bloody miles from where they are), quarantine restrictions on people returning from Spain are being brought back in as of tomorrow.  I don’t believe this.

I’m rather put out, to say the least.  It’s been so long already.

I should think that a lot of people who were considering booking a last minute summer holiday abroad are now rethinking.

Is there no end to this?  It’s already nearly August.  There’s talk of the Christmas markets being cancelled – it’d be a huge emotional and economic blow, but I can’t see how they can go ahead, given how crowded they get.  Some Christmas events have already been cancelled.  A lot of people have rebooked holidays, not to mention weddings, for next year, but it’s looking increasingly likely that this could go on for months yet.  And, daft as this may sound, wasp season starts in a couple of months, and all this al fresco dining will not be much fun then.

It had been a nice day until this happened.   The forecast was for rain, which had upset me, but the forecast was wrong.  A full day’s play at the Test match.  And I had a lovely time at Speke Hall.  Quite a few areas were cordoned off, but the main gardens and woodlands were open, and I had a takeaway cream tea at a picnic table by an apple tree 🙂 .  It was so nice.  It actually felt like summer! 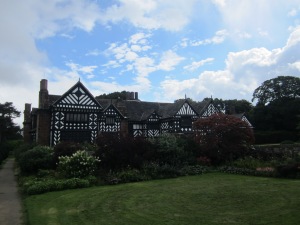 Gyms and indoor pools can reopen from today.  I don’t even know whether my gym’s reopened or not: I might ring and ask.  We are not currently getting coronavirus death statistics, as the figures are apparently crap.  Seriously.  And coronavirus has now hit Coronation Street.

Well, I should have been coming back from Iceland today, after Wimbledon and Euro 2020, and ready for the Olympics.  Instead, I’m here, and it’s been the last day of the Premier League season … and we did it!   Not sure how, given how badly we played, but we’ve made the Champions League!  And we won’t even qualify: we finished 3rd.

Whew!  That is a big boost, after the first the news about Spain (which has left a lot of people in a mess, and is the headlines of the news) and then the news, today, that my gym won’t be reopening until January.  This is bloody ridiculous. Gyms can open now.  OK, it’s quite a small gym, but it’s never that busy, so I can’t see the problem.  It’d just take a bit of effort – but they evidently don’t want to make that.  There was some muttering about refurbishment.  They’ll probably try to whack the price up.  I’ve asked for my money back (it’s an annual subscription) and someone’s supposed to be contacting me.

I don’t know what to do now.  A lot of people’ll go to other gyms, but this one’s just so convenient.  I’m getting exercise for now, because, as long as I’m not trapped in an office, I can go for a long walk every day, but this won’t go on for ever.  Another problem!!

Some rain today, but dry spells too.  I went to Wycoller Country Park – where the now-ruined Hall’s supposed to have been the inspiration for Ferndean Manor in Jane Eyre – this morning, just for somewhere different to go, and then to the park before the match.  The toilets at Wycoller are locked, “due to coronavirus” (i.e. the council, who’ve already tried to close them down once, can’t be bothered cleaning them), but the cafe’s open for takeaways 🙂 .

Our council’s said that they’re planning for this to go on until next summer.  There seems to be no end to it.  But at least we’ve got that Champions League spot!